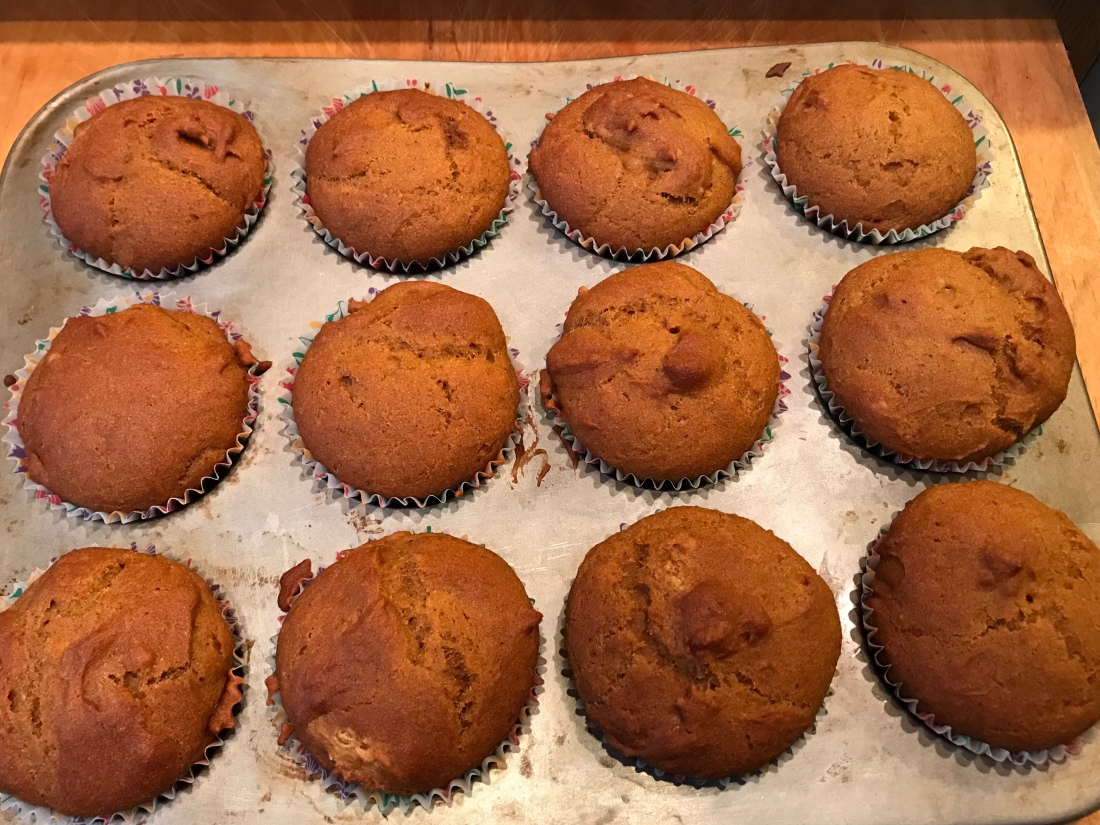 These pumpkin muffins, are gluten free and vegan. While I am not vegan, I am dairy free, and have had issues with eggs, so when I make stuff for myself, I definitely need to avoid dairy and try to avoid eggs. I also try to limit the amount of gluten that I eat.

Over the last couple of years, I have been seriously considering what I am doing, and how it hasn’t been working out here for nearly a decade. I have also been contemplating what I am supposed to be doing with my life. When I realized I wasn’t supposed to be a teacher, I have never really had normal career aspirations, all i have wanted to do is be a wife and mother. I have wanted to cook, bake and can. The older I have gotten, the more my desires, interests, and lifestyle choices have changed. I realized long ago, that the city life is not for me.

The idea of being solely reliant on others for my food, and not knowing where all my food comes from. I prefer the idea of growing a garden, and raising / hunting / fishing my own meat, or get it from local sources where i know how it was raised. I also love being outdoors, working the earth, a slower pace of life. At this point, I don’t want to live completely off grid, but do want to live a more sustainable and self sufficient life. I am the kind of person who would rather be busy working hard, taking care of house and home, and family, and having less of a need for and time spent using modern technology like phones, and computers.

I love knitting and making hand knit items. So I am able to make some of my own clothing items.

I am definitely looking at moving someplace else, that is more conservative, and where the laws are more favorable for Homesteading, hunting, homeschooling, and more favorable to living a life where the government doesn’t listen to the vocal minority. Some of my issues with the big city life, it’s always on the go, it’s such a fast paced, consumer driven. The commute time, it takes 30 minutes to get to work at 4:30 in the morning, and 45 minutes to get home, and my job is 12 miles away. Crappy / completely inconsiderate / high sense of self entitlement (ie, its all about me, and I can do whatever I want, the rules don’t apply to me, neighbors be damned), and just plain rude neighbors can happen anywhere. In the city they are a stones throw away and living right on top of you, so between dealing with the revolving door of college kids in the party house catty corner to us (that has been such for over 20 years), the neighbor across the street is is the epitome of self absorbed/ it’s all about me / I’m better than anyone else Millennial across the street who runs his business illegally out of his home, not to mention paying over $6000 in property taxes… and having experienced small town life in a more rural area for myself, I have had enough of the city. While I was in college, I learned one of the biggest things I could have about myself, I am a small town / country girl, who needs elbow room and room to breathe. There is so much more to life than the rat race of the city. Sh*tty neighbors can happen anywhere, to me, when their house is more than just across the city street from you, you have more options for dealing with them that aren’t illegal, immoral and doesn’t actually physically hurt any living being.

When I was younger, I wouldn’t have thought much about having to leave for work, by 4:30 in the morning. The homeless / street people / people who rummage through your recycling bins the night you put them out before garbage day, has made me really uneasy. I live in what was a good / highly desirable area, but I no longer really feel that safe. I feel like I am always having to watch my back. Downtown is a no go zone, and it’s a public health hazard, In the time I have been at my current job, just about every time I go to work, I see homeless people sleeping on the sidewalks of the shopping area, not far from where I live. There was one morning, as I was heading out to go to work, between 4:15 and 4:30 in the morning, it was garbage day for those living on the other side of the main (yet not super busy at this part of it) road, and there was a homeless / street person with their bicycle leaning against the stop sign, staring at me. That definitely made me feel unsafe. I definitely made him aware that I knew he was there, without saying anything. Our city government, has done nothing to deal with the homeless situation, the hands of our law enforcement officers are tied in dealing with any situation (whether it’s the homeless or protesters) leaving them ineffective and a joke. Having seen this city go from one that was fairly liberal, but was more live and let live, and the city that wasn’t as horribly run, to a city that is no place to live unless your a liberal hippy, who wants to coexist with the homeless and drug addicts. I have also been the subject of discrimination from the liberal left, here, because I don’t believe what they believe, and choose to live my life differently.

All of this, plus learning what I have about myself, has brought me to the point where it is time for me to move on, find a place that on the whole, is more aligned with my values, and with the way I choose to live my life, and make a life for myself. I realized long ago, that while living in this city, I am just existing. I am making the conscious decision to look for a job else where, in a place that is more aligned with my values, and stop just existing and wasting the life I have been given.